Today is Cooking in Red Socks’ FIRST BIRTHDAY! I can’t believe it’s already been a year since I started creating my little project last year in Venezuela. I started my blog as an outlet to share my thoughts about food and our adventures in baseball. I can bring my computer anywhere, no matter how many times we move each year! I never thought anyone would read it, much less make the recipes! It has been an overwhelming and humbling surprise to see such a positive response about my work. I thought I would celebrate my first birthday by posting about our favorite day of wedding planning thus far… CAKE TASTING and a recipe for which flavor takes the cake for our big wedding day.

When Ryan and I got engaged, we immediately decided to wait the extra year and plan our wedding in the off season because Ryan “wanted to be involved in wedding planning.” Uh huh. Sure. I was pretty convinced he was just saying that so that he wouldn’t have to deal with Bridezilla during baseball season. But sure enough, he’s been to nearly every meeting this off season. I have to give him a lot of credit; I don’t know many guys that would stick around for the flowers, or the invitations, or another dozen or so appointments. So when it came time for cake tasting, I knew that Ryan would certainly be attending the appointment. 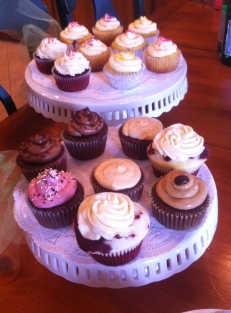 Cake tasting is everything you want it to be and more. Our very good friend, Robin, from Robin’s Bake House in Denver, is making our cake for us and we feel so honored to have her play such an important role in our wedding. When we initially sat down to talk to her about flavors, we tossed around some ideas that sounded good. Ryan loves chocolate. I don’t particularly like chocolate, I like lemon. At a traditional wedding cake shop you are allowed to choose from a set menu of about eight flavors. Not with Robin. The sky was the limit for brainstorming flavors. I had thought that we narrowed it down to three or four flavors for the tasting, and couldn’t believe my eyes when we walked into her home and saw that she had made OVER A DOZEN FLAVOR variations for us to try! Lemon? Sure! How about lemon, lemon raspberry, and lemon blackberry? She didn’t know if we liked lemon buttercream or lemon curd, so she made both. Did I mention Ryan likes chocolate? She made red velvet cake, chocolate with chocolate buttercream, chocolate with chocolate ganache, chocolate and espresso… the list went on and on and on. Ryan’s eyes were about the size of his head he was so excited to sit down and try. For sake of embarrassment, I won’t say how many cupcakes we downed that day, but it was by far the best day of wedding planning. Such a high note to end our offseason.

So which flavor takes the cake?! A total of four. But for my first birthday I’ve decided to post Ryan’s favorite: Red Velvet Cake with Cream Cheese Icing. I am posting the recipe that I usually use for red velvet creations, which comes from Bobby Flay and Food Network. I like this recipe because of the red wine vinegar and buttermilk… something you might not see in many red velvet recipes. These ingredients make a very tender cake.  I’ve made this recipe quite a few times and had great results. I decided to fancy things up for my big birthday celebration and made a two layer cake that is filled with cream cheese icing. To decorate, I topped the cake with chocolate covered strawberries, which adds a simple but very elegant touch. It also is an easy way to determine where it should be cut and how many servings it should make (chef’s hint 🙂 ). This technique makes it easy to serve. I hope you enjoy it as much as we have enjoyed celebrating many wonderful things this off season! Thank you again for your first year of support…Cooking in Red Socks would be nothing without dedicated, health-inspired, and baseball fanatic readers! 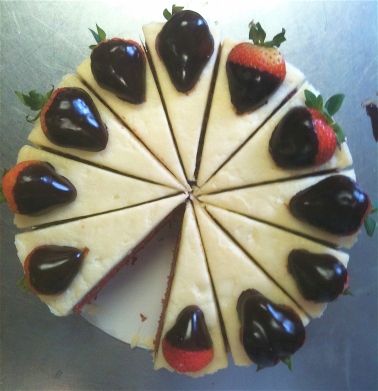 One Year Ago Today: Crab Cakes with Avocado Aioli

Other Chocolate Cravings to Consider:

2 thoughts on “Which Flavor Takes the Cake?”