One of the best things about cooking for other people is introducing them to new dishes. People are so convinced they won’t like something before they even try it. I was doing some private chef work for a family and the father, Bob, is the big cook in the family. He makes great Middle Eastern dishes, but tends to make the same things for their big Friday night dinners. I forced this recipe into the mix one day and it was a huge success. Curry, cumin, and coriander are the the warm flavors of Middle Eastern cuisine. They are complemented by light and fresh flavors like crunchy jicama and sweet cranberries. The comforts of something familiar presented with something fresh and new. 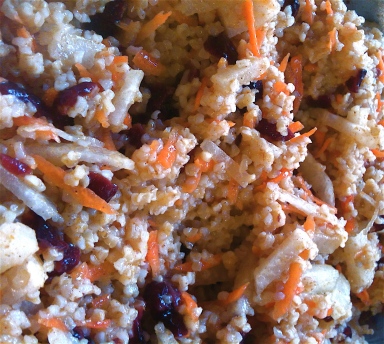