Yawkey Way is the famous little street in Boston that holds the address of Fenway Park, the beloved stadium of the Red Sox. It is named after Tom Yawkey, who owned the Red Sox from 1933-1976. During the baseball season, the street closes and vendors fill in to sell food and souvenirs for a few hours before game time until the end of the game. There you can find some of the ballpark’s finest eats, like Italian sausages and Fenway Franks (hot dogs), to local choices like crab cakes and chowda. Note to readers: insert your best Boston accent for the remainder of the post. The street is packed with game spectators and really creates a fun buzz and excitement before the game starts. 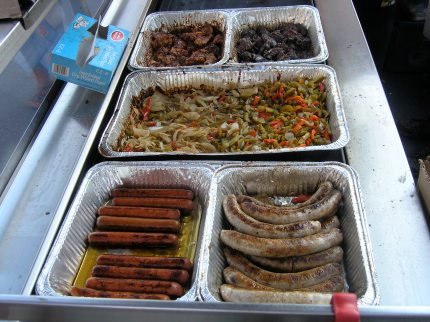 Once you are inside the stadium, you can marvel at the beauty of the renovated Fenway Park, that is celebrating its 100th anniversary this year. The front office has done millions of dollars of work over the years to make it a contemporary stadium within historic walls. You can walk around the stadium and see the Green Monster (Monsta if you still have your accent), which is the giant wall in left field that robs many great hitters of home runs each season. The famous scoreboard is there as well, which is still operated manually season after season.

The last part of my comparisons for stadiums is their “stadium song”, which is usually played every game in a particular inning. For Fenway, of course, this is the song Sweet Caroline by Neil Diamond. The song started playing at Fenway since at least 1997, and has been played at every game in the middle of the 8th inning since 2002. The song was originally written in 1969 and inspired by Caroline Kennedy, who was eleven years old at the time. The Kennedy Family is of course well known for having their roots in Boston and New England soil.